Despite various measures taken by the agriculture department to safeguard maize from invasive fall armyworm, which has been raised in districts including Trichy, Perambalur and Ariyalur, the officials have spotted prevalence of the worm in some areas. Maize is cultivated on about 3.5 lakh hectares in Tamil Nadu.

The agriculture department has commenced mass ground spraying of pesticides in the affected areas. Fall Armyworm had caused extensive damage to the crop last year as the pest spread rapidly within a short period and caused damage despite various control measures.

Even though agriculture officials advocated various methods to adopt management packages such as basal application of neem cake, seed treatment, inter-cropping with pulses and border cropping with gingelly and sunflower to avert the worm, some of the areas in these three districts were affected by the worm, officials from agriculture department said.

Farmers from Trichy usually raise the crop on 45,000 acres. Of them, around 35,000 acres were damaged by the pest last year. Fearing loss, cultivation was done only on around 4,500 acres this year, of which the worm has infected 2,075 acres, officials said.

“We adopted some of the advice advocated by the officials. However, a portion of the crop in my 2 acre land has symptoms of the worm”, said a farmer from Uppiliyapuram.

Officials said that the exercise has been taken up in three districts and identified 2.20 lakh acres with the prevalence of the worm. The state government has sanctioned Rs 47.66 crore for the first phase in 23 districts in the state. For the purpose of spraying pesticide, Rs 2,200 has been allotted by the government, he further stated.

“We have already carried out an enumeration of the crop position. Pesticides have been procured through district-level procurement committees in the respective districts. Members of farmers organization and farmers friends group have been engaged for this purpose. They will spray the pesticide using hand and motor fitted sprayers. The exercise would be conducted in a phased manner,” he added. 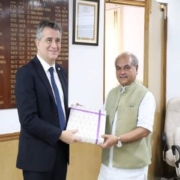