Glyphosate is a broad-spectrum herbicide that kills most broad-leaf weeds and grasses.

By 2006, almost 9 out of every 10 acres were planted with glyphosate-tolerant seeds.

As glyphosate-tolerant seed use became more common, an increasing number of soybean farmers started using glyphosate as their sole source of weed control. By 2018, glyphosate-tolerant weeds were identified in the majority of soybean-producing States and were particularly problematic in States located southwest of the Corn Belt, such as Mississippi, Kansas, Tennessee, Arkansas, and Missouri.

Herbicides other than glyphosate, such as dicamba, can help control glyphosate-tolerant weeds.

In 2018, about 43 percent of U.S. soybean acreage was planted with dicamba-tolerant seeds.

This chart appears in the October 2019 Amber Waves feature, “The Use of Genetically Engineered Dicamba-Tolerant Soybean Seeds Has Increased Quickly, Benefiting Adopters but Damaging Crops in Some Fields.” 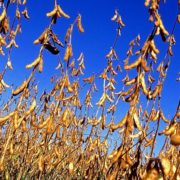 Uruguay soybean production down 61% due to severe drought