As part of this process, the policies and regulations issued by countries worldwide and the recurring agricultural problems will lead to some opportunities and challenges to the global agricultural development.

Global growth of agri-input can be expected

As far as short-term and medium to long-term development trend are concerned, the global agri-input industry has entered a period of slight decline and low growth due to the influence of internal and external market factors, especially in the segments of traditional crop protection and fertilizers. The compound annual growth rate (CAGR) in their case will remain low in the next five years. However, the emerging biopesticide and precision farming segments are expected to enter a period of rapid growth in the coming five years. 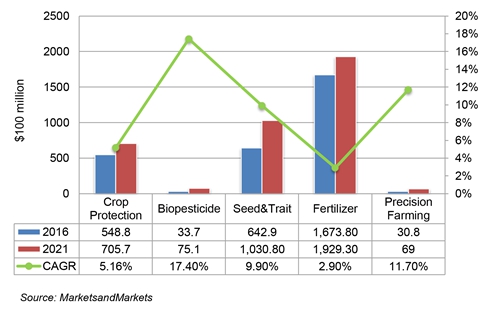 According to the report published by MarketsandMarkets, the market for crop protection chemicals is estimated at $54.88 billion in 2016 & projected to grow at a CAGR of 5.15 percent from 2016 and reach $70.57 billion by 2021, with herbicides occupying the largest market share (44.2%), followed by insecticides and fungicides. The biopesticide is expected to become the fastest growing category of products. In the coming five years, the global seed , fertilizer and precision farming segments will also maintain varying degrees of growth. In particular, though the overall growth of the fertilizers segment is not optimistic, the novel special fertilizers are expected to become the flavor of the future market and experience thriving development due to their special functions such as disease resistance, drought resistance and stress resistance and also because these are in line with the mainstream direction of development in a green, ecological, environmentally friendly way.

Laws and regulations continue to affect the industrial pattern

As we all know, the European Union (EU) is one of the world’s most advanced economies and its plant protection laws and regulations are very stringent and play a lead role globally. All policies and regulations enacted by the EU are likely to affect the global agrochemicals industry. The renewal of glyphosate, the development of new standards of endocrine disruptors and the upcoming review of neonicotinoids in 2017 in the EU will have some impact on the other countries’ policy making process for the concerned products. In addition, Brexit may also influence the global agricultural market to some extent.

In North America, the outlook for glyphosate and neonicotinoids was equally bleak. The US Environmental Protection Agency (EPA) recently announced a plan to reassess the carcinogenic risk of glyphosate and the Health Canada planned to phase out most uses of neonicotinoid insecticide imidacloprid. In both South America and the Asian-Pacific region, some old products with high risk will also exit the market.

In addition, the global controversy over GM technology has not come to an end but become even more intense, especially in GM crop growing and seed promotion, which leads to different national policies. The United States is the world’s most mature GM crop growing country. Brazil, India and other countries are accelerating the commercialization of GM crops, benefiting from national policies. In the EU, uncertainty exists when it comes to growing GM crops in the future because of considerable internal disagreement. At the beginning of 2015, the European Parliament passed a decree allowing EU member states to approve, ban or restrict the growing of GM crops in their own countries. In 2016, the US House of Representatives passed a bill on the labeling of GM foods while the Chinese government delivered a clear message to promote the industrialization of insect-resistant corns in its “13th Five-Year Plan” period. Besides, the game around the application of GM technology ushered in a historic scene in 2016, where 110 Nobel laureates signed an open letter which attacked Greenpeace for campaigning against genetically modified crops.

European Union
• In January 2016, EFSA announced to update neonicotinoid assessments at the beginning of 2017.
• In March 2016, UK announced to ban the sales and use of chlorpyrifos from April.
• In April 2016, EFSA announced to review fipronil data collected for risk assessment for bees
• In June 2016, the European Commission decided to extend glyphosate licence for 18 months towards the end of 2017.
• In June 2016, the European Commission issued proposed criteria for endocrine disruptors
• In June 2016, France announced to ban neonicotinoid insecticides in 2018.
• In June 2016, Brexit vote was approved.
• In June 2016, Switzerland announced to extend the current moratorium on GMOs in agriculture from 2017 to 2021.
• In July 2016, Malta announced to ban glyphosate .
• In July 2016, France withdrew 132 authorisations for POE-tallowamine based glyphosate products.
• In August 2016, Italy placed important restrictions on the use of glyphosate.
• In November 2016, German cabinet approved draft law banning GMO crops.
• In December 2016, EFSA and ECHA announced to jointly develop scientific guidance to enable identification of endocrine disruptorsNorth America
• In February 2016, Canada planned to cancel some uses of fungicide chlorothalonil.
• In March 2016, U.S. EPA moved to cancel the insecticide flubendiamide.
• In March 2016, Canada planned to ban iprodione fungicide.
• In May 2016, Canada planned to stop issuing new conditional registrations for pesticides since June 1st, 2016.
• In July 2016, Canada proposed to carry out new Pesticides Fees Regulations
• In July 2016, U.S. Senate passed GMO labeling bill
• In November 2016, Canada proposed to phase out most uses of neonicotinoid insecticide imidacloprid
• In December 2016, the U.S. EPA started to assess glyphosate’s link to cancer
• In December 2016, the U.S. EPA prohibited 72 inert ingredients from use in pesticidesSouth America, Asia-Pacific, and Africa
• In January 2016, Uganda close to passing GMO law
• In February 2016, Brazil prohibited use of prochloraz fungicide
• In March 2016, Philippines approved new GMO rules.
• In March 2016, Chile’s Agriculture Ministry launched plan to reduce use of agrochemicals
• In May 2016, India planned to phase out 18 pesticides before 2021
• In May 2016, Chinese Ministry of Agriculture announced to ban or restrict 8 pesticides
• In June 2016, Tanzania planned to approve GM crops.
• In September 2016, Sri Lanka announced to relax glyphosate ban.
• In October 2016, Argentina determined that the imports of several agrochemicals will not have “automatic licenses” anymore. 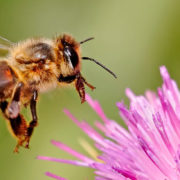 Neonicotinoids: Public consultation on a draft Decree in France