Deputy Tereza Cristina da Costa, leader of the Parliamentary Front of Farming (FPA) of Brazil, was announced as future Minister of Agriculture of the Government of Jair Bolsonaro, informed the country’s president-elect on their social networks.

Bolsonaro, whose mandate will begin on January 1, communicated his decision after holding a meeting in Brasilia with representatives of the influential group of rural landowners in the Brazilian Congress.
The extraordinary minister of the Transitional Government, Onyx Lorenzoni, one of the men closest to the captain of the Army reserve, was also present at that meeting.
The vice president of that bloc, the deputy Alceu Moreira, said that the Ministries of Agriculture and Environment should not be merged, as Bolsonaro had suggested in the first term, winning the elections on October 28 with 55% of the votes.
However, after receiving criticism from both ecologists and some rural producers, the extreme rightist said he could desist from his intention to merge the two portfolios and that the final decision would be taken by him.
The future Minister of Agriculture is an agronomist, entrepreneur and one of the main proponents of the bill that makes legislation on the use of pesticides in Brazil more flexible.
Federal Deputy for the Democratic Party (DEM), Da Costa, 64, expressed her support for Bolsonaro during the election campaign and is the first woman appointed to compose the government that the president-elect will assume on January 1.
In addition to Da Costa, another of the ministers confirmed by Bolsonaro is Judge Sergio Moro, responsible in the first instance of the Lava Jato operation and who condemned former President Luiz Inácio Lula da Silva for corruption and will carry the Justice portfolio.
In addition, Paulo Guedes will assume the Ministry of Economy, astronaut Marco Pontes will lead Science and Technology and General Augusto Heleno will head the Institutional Security Cabinet.
Source: www.agropages.com
November 20, 2018/by Sandra Módenes
http://www.dextrainternational.com/wp-content/uploads/2016/07/Logo-Dextra-300px-New.png 0 0 Sandra Módenes http://www.dextrainternational.com/wp-content/uploads/2016/07/Logo-Dextra-300px-New.png Sandra Módenes2018-11-20 16:08:062022-04-22 09:54:37Brazil: Tereza Cristina Appointed as Future Minister of Agriculture 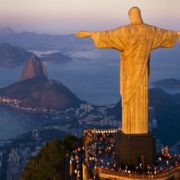 Brazil’s glyphosate imports fall 70% in first half of year