Nigeria made significant progress in agricultural biotechnology in 2019, approving two genetically modified (GM) crops — pest-resistant Bt cotton and cowpea — that are very important to the country’s economic development and food value chain. Now it is gearing up to get those crops in the ground for the 2020 planting season.

The adoption of Bt cotton is expected to help revive Nigeria’s comatose textile industry, which has dramatically declined from its heyday of employing over 450,000 in more than 180 mills and contributing some 20 percent of the nation’s gross domestic product (GDP). Just 25 firms remain, and they are operating below capacity, resulting in huge economic losses.

Similarly, cowpea is one of the most important staple food crops in Nigeria, where it is popularly referred to as the “poor man’s meat” due to its ability to deliver a high protein content at a lowest cost than meat, poultry or fish. Nigeria is the world’s largest consumer of cowpea in the world, but farmers have been unable to meet demand due to pest-related crop losses. As a result, the country must import 500,000 tons per year — to the tune of N20 billion — to supply annual consumption of around 3.6 million tons.

Through genetic modification, Nigerian scientists introduced the Bacillus thuringiences (Bt) gene into cowpea, successfully conferring 100 percent protection against the destructive Maruca insect. Bt cotton, meanwhile, provides inherent resistance to the devastating bollworm, which can cause yield losses of up to 60 percent.

Expectations are high for both crops and preparation currently is in top gear to grow both crops commercially in the upcoming planting season.

Dr. Ogbonnaya Onu, the minister of science and technology, said the approval and adoption of the new varieties shows that Nigeria has joined the comity of nations in the area of transgenic crop development and adoption and is therefore ready to develop its agricultural sector. He noted that government will adopt policy measures to enhance the farming community’s access to the products and technology to facilitate immediate and large-scale adoption.

The government and civil organizations also are equipping farmers with the right information, education and skills to effectively start growing the crops as soon as the season commences. Several entities, including the Institute of Agricultural Research (IAR), the National Biotechnology Development Agency (NABDA) and the Africa Agricultural Technology Foundation (AATF), among others, have consistently built the capacity of farmers in all the regions where these crops are grown.

Dr. Alex Akpa, acting director-general of NABDA, said farmers were directly involved in the field trials, which gave them the opportunity to grow GM crops alongside conventional ones to observe the difference in yield and also learn in the process.

In 2019, over 2,500 farmers were specially trained in growing Bt cotton, a number that will increase to 5,000 this year and 7,500 to 10,000 by 2021, he said. “So seed companies will be involved and farmers will be properly trained and empowered for growing the crops in the next panting season,” he added.

The role of seed companies

The government has consistently maintained that local seed companies will be leading the multiplication and distribution of the home-grown seeds to make them accessible to farmers.

Speaking at a recent press conference on the status and plans of the recently approved Bt cowpea, Prof. Mahammad Ishiyaku, principal investigator of the PBR cowpea project at the Institute of Agricultural Research (IAR) in Zaria, said all seed companies that will be involved will be profiled on the basis of their capacity to deliver and diffuse these seeds into the selected nooks and crannies of the cowpea growing areas of the country.

He further explained that seed companies have their distributors in various places, including the rural areas, which will make it easy for smallholder farmers there to purchase the improved seed.

Onu said Mahyco will be leading on the Bt cotton distribution and is already teaching seed companies and farmers the standards and specifications for seed multiplication. Local farmers and seed companies will be left to champion the course as soon as they become self-sufficient in deploying the technology.

Dr. Rufus Ebegba, director-general of the National Biosafety Management Agency (NBMA), said all GM crops that had been examined and approved by the biotech regulatory agency were sound and safe for the nation’s adoption and commercialization.

However, the agency will continue to monitor the process to ensure safe application of the technology because it is a relatively new innovation that should be closely tracked for the safety of Nigerians and the environment, he noted.

Additionally, Nigeria has regulations that require all GM products to be labelled to allow consumers the option of freely choosing the products they want to buy. Labeling is not intended to stigmatize the product, but is done solely for informational purposes, he said.

Prof. Bamidele Solomon, former director-general of NABDA and chairman of Ife Biotechnology Group (IBG) at Obafemi Awolowo University, said modern biotechnology provides the nation with tools for trait improvements in crop germplasm for increased grain yields in ways compatible to human and environment welfare. He stressed that it is important that African farmers and consumers in Africa be given a chance to benefit from increased opportunities, productivity and efficiency, and having GM crops commercialized in African countries could result in lower food costs.

GM crops could help to feed hungry people, he said, noting that it would be shameful if well-fed Westerners’ issues, including trade, prevent this technology from benefitting the poor. 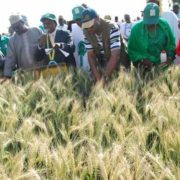